Posted by Marlin on October 16, 2017
Posted in: Uncategorized. Leave a comment

OK – I’ve pre-ordered this from Powell’s Books, my favorite online source for books.

Posted by Marlin on August 15, 2016
Posted in: Uncategorized. Leave a comment

The Boston Ironsides have announced their Fall season schedule, and the Ironmen of the Ironsides will be hitting the pitch every weekend in September and October – nine consecutive Saturdays.…

And so it goes.

Linda Ellerbee​ is retiring from TV this evening when she signs off tonight’s episode of Nick News with Linda Ellerbee​, Nickelodeon’s award winning news show.

And then in 1991 she started to produce, write an anchor Nick News with Linda Ellerbee​. The show made history as the first children’s television program ever to win the prestigious Edward R. Murrow Award for Best Network News Documentary for the show, Coming Home: “When Parents Return from War.” The show won several Peabody Awards, Alfred I. duPont–Columbia University Journalism Awards, 10 Emmys and the Lifetime Achievement Award for Children’s Television at the annual Banff International Media Festival.

Why did she work so hard to make a children’s television show one of the best news shows in existence?

“My goal,” said Ellerbee, “was never a nation of kid news junkies. I am more subversive; I wanted to grow a nation of rowdy citizens.”

So yes, I’ll be watching tonight. And so it goes…

So, when I was a nerdling combing the shelves of my school and public libraries for books that looked like they hadn’t been checked out in decades (I imagine I was hoping to stumble across an ancient book of spells or some musty alchemical tome) I came across some books on the Duke University ESP studies conducted in the 1950’s.

Of course, I checked them ALL out.  And kept renewing them, re-reading them until I got a reasonable grasp of the statistics.  In the over four decades that have passed between then and now, most of what I read there has faded into vague notions that ESP of some sort probably does exist, but one set of conclusions arising from their data blew my juvenile mind.  The claimed concrete evidence for anti-esp. A small subset of their subjects consistently scored significantly below chance when trying to predict die rolls, viewing Zener cards, etc. Remember the movie “The Cooler”?  Yes,

What does this have to do with me and the title of this post?  I’m convinced that I exhibit anti-gaydar/bidar.  When given no other information than my own personal observations of a man, if my first guess is that he is probably gay or bi or somewhere not on the hetero-normative end of the Kinsey Scale, then, more likely than not, he will turn out to be absolutely straight, as in attracted exclusively to females. Even if I try and second or third guess myself, I end up wrong.

Yes, it is in fact annoying.

Posted by Marlin on May 2, 2008
Posted in: Film, sci-fi, Science Fiction, This Terrestrial Life, Uncategorized, Writing. Leave a comment 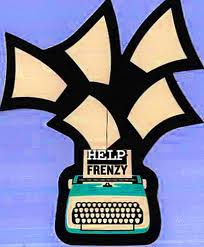 I didn’t work as diligently as I could have. I did, however keep the story from morphing too much and stuck to my treatment.

It will definitely need a re-write. The beginning is somewhat devoid of my personal style, which pushed it’s way to the fore as the month progressed, so the beginning and middle are different in flavor.

I also learned more about the characters as time progressed.  Now, this is a natural

occurrence, even desirable, as long as the added character depth doesn’t make the script

I will finish this. I can’t work on it this weekend though. I have work work to do.

Posted by Marlin on September 17, 2004
Posted in: Uncategorized. Leave a comment

Courtesy of the Magic Hat Brewery

Posted by Marlin on November 25, 2003
Posted in: Uncategorized. 1 Comment

Or at least the torture.

This is it. I’m hanging it up for National Novel Writing Month. I’m going to erase my measly 3000 (plus or minus) file. It’s really atrocious. Trust me, Jack, you don’t want to read it.

Am I going to thy this again next year? Who knows. I do, however, have some ideas.

Posted by Marlin on November 19, 2003
Posted in: Uncategorized. 1 Comment

Some folks write weblogs brimming with ringing manifestos. Their online journals are a call to arms. They’re trying desperately to awaken a world full of sleepwalkers.

Others delve deep into the mysteries of and banalities of pop culture. They place the wonderful weirdness of mass movements under the microscope and dissect the who, what, when, where, why and how of fads and fashions. They’re not entirely unlike lepidopterists cutting up glittering butterflies.

Still others produce highly personal journals. They rip away their skin and bare all, allowing us to exercise our voyeurism, even as they exercise their exhibitionism. Perhaps we learn a bit about ourselves in the process.

Do I really have anything intelligent to add to the conversation?

As an aside, there was a time when weblogs were like travelogues. They chronicled a person’s travels through the wild, wild, web. They were k kind of like trails of breadcrumbs left in the electronic wilderness. They were definitely an offshoot of web surfing, that zen-like time-suck consisting of traversing the web link by link by link, with no real end in mind. Anyway, does anybody write weblogs like that anymore?

Time to Give Up?

Posted by Marlin on November 15, 2003
Posted in: Uncategorized. 1 Comment

So, I’ll make one last push tomorrow to get caught up on NaNoWriMo. If I don’t get back on track, I think I’ll hang it up.

Posted by Marlin on November 10, 2003
Posted in: Uncategorized. Leave a comment

I’m behind in my word count for NaNoWriMo. And the idea of posting this unedited mess for the world to see is terrifying. And I’m finding out that people who I didn’t think read this blog, are reading it.

But it does seem to be taking a weird kind of shape.

Posted by Marlin on November 5, 2003
Posted in: Uncategorized. Leave a comment

A blog meme from From Unconscious Mutterings…

Posted by Marlin on September 9, 2003
Posted in: Uncategorized. Leave a comment

Leo Laporte has finally managed to say something on The Screen Savers that I totally disagreed with. It was during a segment where he had to guess what Ray Bradbury (Happy Birthday, Ray!) thought about several things. To make a long story not quite so long, Leo opined on how awful the movie version of Fahrenheit 451 was.

Oh, it was only directed by Truffault. I guess the only thing close to an explosion was an old lady burning to death on a pyre of her beloved books. For shame, Leo, for shame.