I’d never noticed, or at least made note of, the sheer number of giant robots there are floating around in my childhood memories.  One of the first animated cartoons I remember watching was Gigantor.  I can still remember the theme song. It premiered in 1964, so I’m guessing I saw it during it’s first run. It makes plenty of psychological sense. What little kid doesn’t want to be huge and powerful or to command something huge and powerful?
What brought this up? Well, of course the idea of building a giant humanoid robot, climbing into it and fighting another robot is pretty ludicrous and pretty awesome. It is so ludicrous and so awesome that, of course, groups of folks out there are building giant robots. To fight each other. While they’re inside of them. No, these aren’t remotely controlled creations like in other robot fighting leagues like Battlebots®. I’m reminded of Mark Pauline’s Survival Research Laboratories, except I don’t know if Paul the nine (eight? seven?) fingered would be, ummm, extreme enough to climb into one of these in an arena.  He’s given enough of his flesh and bone for his art.
The thing is, I would totally watch this.  I’d be a happy spectator.  There will not, however, be live spectators for the first fight sometime in September 2017.  Why not? Well they’re leery of killing their audience. 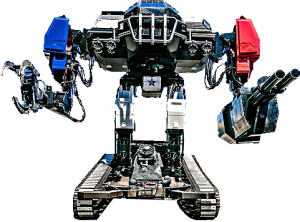